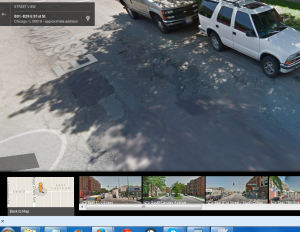 Chicago Mayor Rahm Emanuel, said in a press release March 6, 2014 an audit of recently repaved arterial streets are under warranty and will be repaved.  Arterial streets means the main streets and the connecting streets within the neighborhoods.  It is Alderman Carrie Austin of the 34th ward that suggested the audit upon noticing  cracks in recently paved streets within her ward that encompasses 97th street to 127th street and Vincennes to State Street.  Alderman Carrie Austin is the Chairman of the Committee on the Budget and Government Operations which oversees the care and condition of the city operations like repairing potholes among many other things.

The Chicago Department of Transportation, CDOT, is also out making repairs to the streets with pots holes.  If the sections under warranty are repaired by CDOT, then the private utility companies will reimburse the city taxpayer funds.  CDOT Commissioner Rebekah Scheinfel is on the case and reports that 30 pot hole filling crews are all on the streets as of the March 6, 2014 press release and expect to cover about 25,000 miles of streets repaving potholes.  Today’s press release a few moments ago stated that Mayor Emanuel is creating a strike team to work on the heavier trafficked streets on Mondays and Fridays for the next few weeks to try and make the streets more usable.  The higher speeds and heavier traffic has taken a greater toll.  The pothole crews will be working off of a geographical grid.  ACAW MEDIA is waiting to hear back from CDOT  Public Information Officer Peter Scales as to whether a copy of the grid will be provided.  The potholes in this article reported via online at http://www.cityofchicago.org/311 and an additional photo of pothole submitted with article link for all of the photos in the slide show of the potholes to the city of Chicago 311 website.

* Use a Open 311 smartphone apps like ClickFix, the  Chicago Works app.  Chicago Digital.  You may also report potholes via text by texting ChiText with the location and photo with the word “Chicago” to 311311.  You can find more applications for city of Chicago Civil services via Digital Hub.  Check the potholes completed in last seven days on the city website.

Potholes in this article reported via online at http://www.cityofchicago.org/311

Additional Photo of pothole submitted with article link for all of the photos in the slide show of the potholes.

This site uses Akismet to reduce spam. Learn how your comment data is processed.